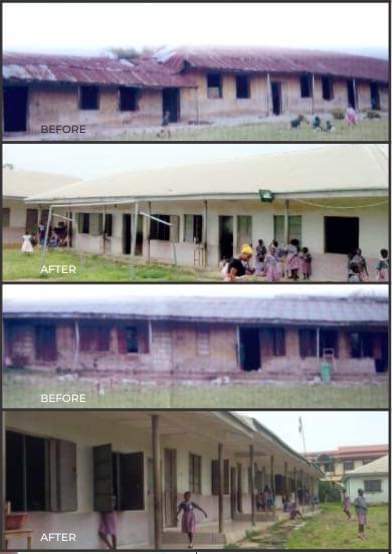 December 7, 2021 Author by The MessengerPosted in Events, Featured Post, Messenger Articles, The Message

In a bid to nurture the fingers that fed him, Dr. Olukoya has embarked on a renovation spree, thereby bringing change to the academic institutions that gave him the first bite of education in life.

The exceptional cleric had heeded the cry of his aging alma mater to salvage it from deterioration and decay.

pupils took lessons under deplorable conditions as some of the classrooms’ floors, roofs, doors, and windows were damaged. The school was a disaster waiting to happen, but Olukoya’s kind gesture came to the rescue. Mrs. Famakinwa Folashade Adelanke is a former headmistress of St. John’s CAC Primary School, Oke Igan, Akure. She expressed great delight and appreciation at the rehabilitation of the elementary school that gave Daddy GO the foundation for his stellar academic brilliance and exploits. Narrating how the Minister of the Word got involved in the face-lift of the battered school, Dr. Olukoya went beyond the expectation of the school authorities. He embarked on a comprehensive refurbishment that transformed the school into a 21st Century institution.

The gesture confirmed God’s timeless Word in Zechariah 4:10, which states: “Do not despise these small beginnings, for the Lord rejoices to see work begin.” Daddy GO is a typical example of one of the eggs St John’s incubated, which has hatched into chicks, returned fully grown, to give back in immense measure.

The head teacher says their illustrious ‘old boy’ did not stop at single-handedly rebuilding all the structures, but has done quite a lot for the school. “During our harvest ceremony last year, Baba did so much for us. His name will remain indelible in the annals of this nation and beyond.”

Engr. Awe Hilary, is a man saved by Grace and committed to the propagation of the gospel of Jesus Christ. He is married to Mrs Nanko Awe, and they are blessed with three daughters, Deborah, Anna and Hillary View all posts by The Messenger