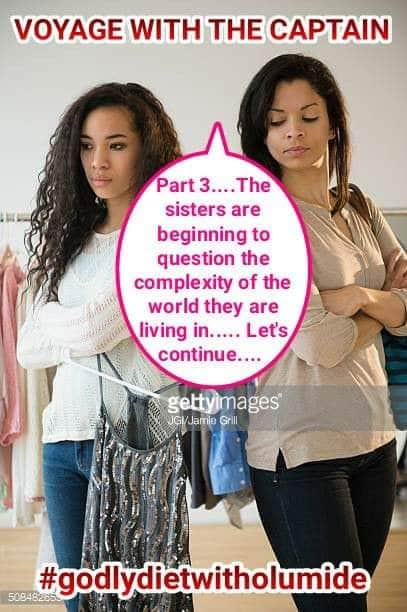 “Why did she send you there again?”

“Has she forgotten how wicked he is?”

Sophia rattled on while her sister bowed her head with tears dropping onto her opened palms. After a moment of silence, Stella narrated what happened,

“His men tried to rape me when he refused to deliver the goods but I only escaped by a whisker. I was so lucky…”

Sophia watched her beautiful sister as she cried, drew closer to comfort and encourage her.

“My dear, everything will be over very soon. I mean, very soon.” Sophia assured her.

“When? When? I am getting tired by the day and everything here choked me.” she complained.

“These wicked people roam the streets and nobody could arrest them. Wickedness within and outside the home. Why are some people so wicked?” Stella lamented.

Stella waited for another response from her Sister rather, Sophia sighed heavily and her sister looked at her inquisitively.

“What happened? Please, take it easy. I don’t want to lose you now or else, these wicked people will swallow me alive.” Stella said with worry written on her face.

“Shortly before you came in, I had a terrible dream.”

She narrated how their Uncle almost killed them and dispossessed them of their belongings. However, they dismissed the dream as normal thinking good deeds always triumph and they were immuned against evil.

“Sister, you are leaving tomorrow and I will be left alone again” Stella said with a trembling voice.

“At least I have spent five days with you here and I need to finish my final project on time.” She replied with mixed feelings.

Stella looked at her admirably and said,

“I am proud of you and you will soon become a world-class economist. Get ready to become another Anna Schwartz, the renowned economist.”

“Not only an economist but an elder sister to a soon-to-be undergraduate.” Sophia replied her with a smile.

“Oh, I hope I will pass my exams under the regime of this Pharaoh and his wife.” Stella said sarcastically.

Sophia reassured her that with determination and focus, great achievement was possible. Stella looked at the photo which was hung on the wall and said,

“Mike and Sharon are kind-hearted. Really, they are miles apart from their parents.”

They talked at length until midnight, hugged and went to sleep.

When it was exactly 4 am, Sophia sprang up from the bed and went to switch on the light. However, Stella was fast asleep and only her snoring could be heard.

She wondered why she woke up at exactly 4 am and looked around to be sure everything was fine.

“Why did I wake up at exactly 4 am? Did I hear any sound? Is there a stranger in the room?” She thought within herself.

She looked around again, pondered a little bit and then went to the toilet. As soon as she came out of the toilet, she saw…

To be continued in Episode 4.